Many churches and denominations have split, or are splitting, over whether same-sex marriage partners should be given membership and leadership.

I am on a local committee that recently organized a civil public discussion on the church and same-sex marriage. Our committee includes both conservatives and liberals, with deep connections to very conservative and liberal churches. One of the invited speakers had discussed several biblical passages that appeared to condemn homosexuality, giving reasons why they actually did not condemn homosexuality. I thought some of his efforts had fallen short. I think some of these passages are against homosexuality, and are wrong. Afterwards, there was a debriefing exchange of emails among the members of the committee. It became evident that the core of our disagreement was over scriptural interpretation. In a reply to some remarks by Bill [not his real name] a conservative member of the committee, I wrote:

[Bill], I say amen to your "I believe that our hearts are primarily deceitful (Jer. 17:9) and that we need to sit under the authority of God’s revealed will in his Word." Sign me up.

And I utterly agree with your next sentence too:

Any attempt to take interpretation and application outside of the parameters laid before us in scripture is to me dangerous, irresponsible, and subject to the whims of a given culture and cultural idols.


Great, spot on. But for me, the parameters laid before us in scripture are precisely that IF we engage with our enemies in confrontational communion, in a commitment to struggle with each other and not let go, just like we're doing here in this conversation, then indeed God is revealed in our midst. Emmanuel happens. The breathing body of Christ, the Church+, walks among us. To refer back to your first sentence, the Word lives. I think you all can think of lots of scriptures that support the view that the Holy Spirit continued revelation after Jesus passion. (One example would be Peter's dream of the unclean food, and his acceptance of eating with Cornelius. This abrogated Peter's scriptures.)

Much like the book of Judges where “Everyone did what was right in his own eyes” we too, without a recognized authority are prone to wander and follow after our own desires that Paul acknowledges in Romans 7 are often against the very thing he knows he should do.

Being open to the Holy Spirit, I want to forge communion with those who offend me, my rivals, my opponents, my enemies. I commit to staying in communion with them, that's the Church+. And so my safety net is my opponents. [I name all the conservatives on the committee], do you really think that if I were to wander and follow after my own desires, you'd let me get away with it? The thing that keeps me from sliding on the slippery slope of my own desires is my commitment to you, to not walk away from this conversation until we have consensus. That is my "recognized authority."

I have a question for you. Can you tell me where scripture says it is the end of all revelation? I think that any such assertion is unbiblical.

My next post will say why I think many churches and denominations should split. And that they should, at the same time, on another level, not split.
Email ThisBlogThis!Share to TwitterShare to FacebookShare to Pinterest

A person who speaks “Catholic” may have difficulty understanding a person speaking “Southern Baptist”. They frame the world differently even though they may both use English, and the same scriptures, and even many of the same terms...

--from The Healer Messiah, chapter 1.
Email ThisBlogThis!Share to TwitterShare to FacebookShare to Pinterest 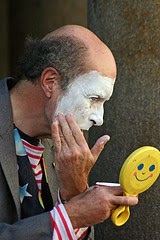 I’m taking a course on Islamic Spirituality, and the professor--my good friend Dr. Seyed Amir Akrami--once remarked that Sufism takes theology not as an end, the truth, but as a means to that end. He implied spirituality is a way, a journey that we neglect at our peril, and Sufi disciplines are to help us stay on that way.

For me truth is a state of blessed conflict, not something that can be written down in a set of propositions. That is, the limitations of my point of view, understanding, tradition and language are transcended by my community where people have different understandings and traditions. The continuous conflict of those perceptions is a great blessing.

My goal is not to synthesize a grand truth that unifies those perceptions, though sometimes that is possible, and if so is wonderful and revealing. But synthesis is not my goal, any more than the goal of learning foreign languages is to make a blend of all the languages learned. My end goal is to live in the blessing of this sometimes chaotic conflict of perceptions in my community. It is the good place, my true home, my salvation, the kingdom of God, enough.

Amir spoke of the virtue of polishing our souls as one would a metal mirror, a trope of Rumi’s, who wrote

A mirror in external form is made up of iron,
the mirror revealing the image of the soul is very valuable

mirror, is the soul of the face of a friend
the face of that friend from that land (Rumi, Masnavi, Book 2 part 1)

(quoted from Fariborz Arbasi, Rumi on Change by Love and Reason, translated by Sherry Nabijou, in process of publication.)

Here the goal of spiritual discipline--the continuous polishing of the quickly tarnished metal mirror--is not the power of perfect vision. Rather, it is to simultaneously have one’s identity and become a mirror reflecting anothers’ identity, and in that mirroring, to see yourself and the other more clearly, though less distinctly, in losing track of the difference between the soul seen and the soul seeing. For me, as here for Rumi, it takes two to tango. I can’t become one without being two.

A favorite spiritual discipline of mine is something I try to do every time I meet another human. As, or before, I encounter them—my spouse, my child, a friend, a stranger, an enemy—I try to remind myself of what they are, and of what I am. We are capable of hosting God’s spirit. I set myself to search for the face of God in them, even and especially in the face of an enemy. To seek the face of my trustworthy opponent, someone with a message for me, a perception for me. I set myself to be quick to report to them if I see anything amiss—if I have a message for them. I pay attention to any loss of dignity of mine or theirs. Such transparency takes paying attention. It is our mutual care, to see what the other does not, and tell each other about it.

This book is about how to live well with people who deny our core beliefs, or whose actions we consider immoral, or who have traumatized us. Such people may be our spouses or kin, or international enemies.

--from The Healer Messiah, Introduction
Email ThisBlogThis!Share to TwitterShare to FacebookShare to Pinterest
Newer Posts Home
Subscribe to: Posts (Atom)