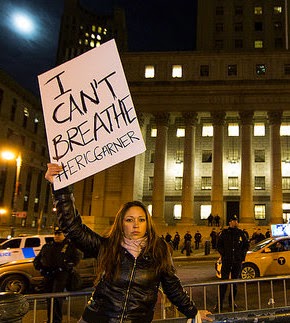 I've been reading John Lewis' Walking with the Wind, his first-hand account of the civil rights movement of the 1960's. Lewis' writing is honest, personal and very real. The non-violent movement convulsed the nation and broke the back of legal segregation in the deep south.

But by the end of chapter sixteen, after the movement had endured all the beatings, shootings, teargas and bombings of the Freedom Rides and Birmingham and Mississippi and Selma, Lewis writes (pg 347):

Something was born in Selma during the course of that year, but something died there, too. The road of nonviolence had essentially run out. Selma was the last act.
...

We're only flesh. I could understand people not wanting to get beaten anymore. The body gets tired. You put out so much energy and you saw such little gain. Black capacity to believe white would really open his heart, open his life to nonviolent appeal, was running out.

Sixty years later, what does The Healer Messiah have to offer the people of Ferguson, or New York, or dozens of other communities? Is there any wisdom beyond nonviolence? Is there a reason why the movement of the 60's ran out of steam? What should be done now?

The movement attempted to use the federal government to force the southern states to end segregation. They built on Supreme Court decisions declaring segregation unconstitutional in education and in interstate commerce. Their strategy was to generate political momentum that would force the Kennedy and Johnson administrations to intervene against southern states to uphold federal law.

State troopers and local sheriff's departments often attacked the movement with dogs, fire hoses, savage beatings and brutal mass arrests. By Lewis' account, the political impact of the horrific TV footage of the peaceful marchers' fate on the bridge out of Selma forced the Federal government to send federal troops, federal marshals, and the FBI to protect the marchers from the sheriff posses and the populace as they walked through the hate-laced countryside from Selma to Montgomery.

Their strategy worked, in that it attained its goal of forcing southern states to end legalized segregation. Their nonviolent courage ignited the nation, and the widespread political support they inspired resulted in the US Civil Rights Act of 1964 and US Voting Rights Act of 1965.

Now we needed to deal with the subtler and much more complex issues of attaining economic and political power, of dealing with attitudes and actions held deep inside people and institutions that, now that they were forced to allow us through the door, could still keep the rewards inside those doors out of our reach. Combating segregation is one thing. Dealing with racism is another. [emphasis mine]

In short, the movement hadn't set out to heal its enemies. The State of Alabama, and the Klan supporters who signed up for the sheriff posses and cheered the club-swinging mounted police, were forced by the feds, not healed.

The Healer Messiah asserts that our only salvation is our enemies' salvation. Our only healing is our enemies' healing. The movement's great but limited results weren't a failure of nonviolent tactics, but were a result of the limitations of their strategy. I'm not saying what they did was an error—they had an opportunity to force the system to behave by its own values, and they seized that opportunity. Their courage ignited many in the nation, and they took a giant step in the right direction.

But there is work left undone.

The way forward is to raise our strategic sights to the healing of our society. We must heal each other. By that I mean inspire each other into the kind of relationship described in The Healer Messiah as a confrontational communion, not a melting pot. It is a daunting proposition, but there is no other final solution. Our weapons are courage, hospitality, humility, mutual inspiration and perseverance. May God, whose spirit we can breathe, help us all.


Addendum: the following is my contribution to the conversation about the structures that have us stuck. I have little experience here, in particular I'm neither black nor a policeman. I offer it humbly, perhaps it will be useful to you.

The logic of police interventions is to control. This is so deep as to be unquestioned. It goes down to the bedrock of the need for the state to have a monopoly on coercive power if it is to protect the weak from the strong. In this logic, control is a virtue of police.

During an interaction between citizens and police, if the police see the citizens as docilely accepting police control, usually all goes according to well-established processes and safeguards. But to the degree that the police feel their control is not accepted, they impose greater levels of physical control. They escalate. In extremis, they'll kill.

Many young black men project a defiance of control, in their stance, their dress, their language and their attitude. This defiance is a virtue of the oppressed. They reject the unfair system under which they suffer. Their every gesture expresses that dignity—their rejection of the system. It's the same reason Palestinian's throw rocks at tanks—a matter of dignity.

Blacks are angry and frustrated at living with unfairness. Whites fear those who have such a demonstrably and historically well-founded grievance against them. The expectation of conflict is all it takes for police to feel a challenge to their control even when there is none.

The virtue of control, the virtue of defiance, overlaying fear and anger. That's how Ferguson, and many other communities, are stuck. This is going to be a long haul.