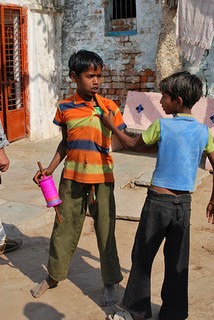 When I was in sixth grade Freddy accosted me in the school bathroom. He was a fifth grader. The bathroom had a door from the hall, but also a door out to the school grounds, and was the easiest way to get out to the ball diamond.

He challenged me to fight. Stood in my way. Said I was afraid.

My folks had told me not to get in a fight. Fighting on the school grounds was forbidden. I was a good pupil. Freddy on the other hand sometimes had issues with teachers.

I was a head taller than Freddy. Freddy was thin, I was solid. He stood there, looking up at me, calling me a coward, daring me to hit him.

I stood there, tears rolling down my face. I told him I wouldn't fight, that I didn't believe that violence solved anything. I didn't back away, but I wouldn't hit him.

I've never been satisfied with that day. All my life I've wondered what I should have done. Now I know.

My family was well off. Freddy's lived down by the tenements. I didn't hang out with Freddy. I was smart, and knew it, and wanted to be a leader. But I was hamstrung by my care for my reputation. If it came to a fight, the teacher's question would be "who hit first?" I wasn't afraid of Freddy, I was afraid of being labeled the one who started the fight. I was afraid for my status in the eyes of adults, the power structure. You can't be a leader with that attitude.

Maybe he wasn't there by choice, and maybe it was frightfully costly to him, but it was true that he dared to spite the system. Freddy was asking "Do you dare to deal with me directly, dare to give me a playing card against you, dare to risk the consequences meted out by the system, or do you stay in the system?"

I hadn't sorted out the difference between being good and being the teacher's pet. I shouldn't be too hard on me--it was a pretty tight fix. If I'd hit him he could have told the teachers I'd started the fight. And if I didn't, he could call me a coward.

But I know that what I did was unsatisfactory. Non-violence isn't the guiding principle. Wanting fair relationships, regardless of the cost, is. And the best way to a real, fair relationship with Freddy just then was to give him a whack. Not to beat him, not to prove my courage, but to dare sharing his world outside the system. To step onto his turf, into his communion, into his power.

Now don't get me wrong. I'm not saying that if confronted with an armed, violent person you shouldn't call in the cops. That's not a question of protecting your reputation, and there's nothing fair about it. But Freddy wasn't a bully 20 pounds heavier than me. He was a scrawny little tough.

Freddy wanted a real peer relationship. He sensed there was something wrong with the way I related to him and others. We were both into fishing in the local ponds and streams, maybe we could have become friends. He had much to offer.