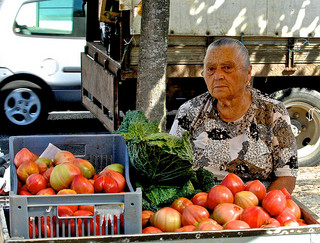 Can confrontational communion survive competition with violence? Our current nation states are in thrall to the idea that the only effective rejoinder to violence is violence. Were there a nation that had a different vision, a nation that was a "beloved community" based on confrontational communion, what's to prevent its violent neighbors from taking over? I want to point out three possible reasons why they would or could not, and discuss the last of the three.

The classical reason is profit. Confrontational communion is highly synergistic, efficient, productive. The violent group might wish, for profit, to trade with the beloved community, and be persuaded that violent takeover would destroy the productivity.

A second possibility is what The Healer Messiah calls ignition--that the leadership of the violent group, aware of the synergy that is strong in every society including theirs, could be brought to recognize the superior path of the beloved community, and be inspired to emulate it within their own society.

This third possibility is what I want to dwell on today--call it violence prevention. The beloved community can act now, to prevent the future emergence of powerful violent people who have a need to be in control.

The traumatized often become traumatizers. Those who have been on the receiving end of the power of violence often live lives defined by the limits that were imposed on them during the time of their trauma. Their lives are permanently trapped in a future they did not chose, they did not want, that was imposed on them. They have reason to believe in the power of violence. Some of them, in their determination never to be outgunned again, spend their lives accumulating the means of violence. They have a deep-seated need to be in control, and become dominators.

I think this is the reason Jesus so emphasizes concern with the poor, the marginalized, the powerless, the oppressed. Relief work, such as helping refugee Syrian children deal with the trauma they have experienced, is not just a moral virtue. It is a strategic necessity for the beloved community.

To the degree that we can heal the trauma of violence, to the degree that we can demonstrate to the traumatized that the world is also a place that loves them, that is willing to share with them, that does not need to be controlled in order to keep from attacking them, to that degree we diminish the future emergence of societies where large numbers of people have the need for dominant control wired so deeply into their psyches that they cannot respond to ignition, or even to friendship, without seeing their traumatizers eyes in every face. In sum, we must show them the face of God, for they have seen the face of hell.