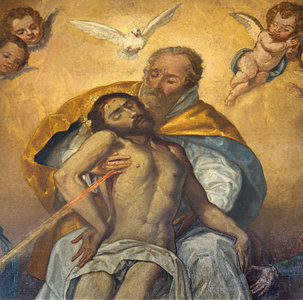 I don’t believe in God.


Or I do. It depends on what God is. If you take the normal, American street definition of God, then no, I don’t believe in that God.


To explain I’ll have to use the whole Trinity, in the order: God the Father, God the Holy Spirit, and God the Son, each time contrasting the street version with mine.


And this is just a blog post, not a tome. It isn’t a convincing argument, it’s just an executive summary pointing in a certain direction.


Street version: God is a supernatural person who knows all the past and the future, who can violate the laws of physics at will, and who is in total control of everything.


My version: Within evolution, of species or of cultures or of behaviors, I see four rules (though actually the latter two are emergent consequences of the first two).

Selection: Life is hard, it is easy to cease existing. In our species’ case, we need water, food, shelter, and we don't reproduce without them.


Coercion: a form can, via force or weaponry, rob other forms of their resources, to the point of enslaving or killing them. A stable ecosystem can be parasitized, which destabilizes it.


These four are the implacable rules of existence. They are our father and our mother. We can get with the program, or perish.


Which is stronger, collaboration or coercion? Creation or destruction, giving or taking, grace or power, the beloved community or empire, stable order or unstable chaos, life or death (think “therefore choose life”)? In the short term, power. In the long term, grace. We’re betting long.


Whoa, you say, where is that warm loving personal God people talk about? Hang on, I said I’d need the whole Trinity. But yes it’s true, where the street sees a supernatural creator God of the physical world, I see implacable logical rules which utterly shape the biological and social world we live in.


Rules aren’t physical, not like a stone is physical. So maybe that’s the overlap between the street’s “supernatural” and the way I think of things. The street’s supernatural God would be an anthropomorphic metaphor for my intangible rules. Not too bad really, if you remember its limits as a metaphor.


Street version: the Holy Spirit is some kind of spirituality, ethereal, the source of inner promptings that cause some people to do things which turn out great.


My version: In human society, the implacable long term (many hundreds of generations) result of the four rules above is collaborative communities and merciful personality types.


In the medium term (tens of generations) violence and coercion have given selective advantage in many circumstances. But the longest term outcome is the slow and inevitable creation of increasing networks of collaboration, i.e. the creation of widespread circumstances where a propensity to violence is a selective disadvantage.


Note the bit of dualism here: both coercion and collaboration give selective advantage. But the one destroys what the other creates. You can’t have destruction before creation, and in the long term, creation is greater than destruction. Destruction has a shorter time horizon than creation does.


I didn’t make the clothes on my back, my car, my house, my fridge nor the food in it. Other people, vast numbers of them, worked together to give me that stuff, in exchange for the work I did doing my specialty that I gave to a relatively small number of people. It can’t be denied that the web of global collaboration is much greater now than it was a hundred generations ago. The degree of our specialization and interdependence is astonishing. Look about you. Nearly everything you see is the result of collaboration.


Thus the character type that is being selected for, in the long term, is one which is capable of inducing collaboration even in its enemies. It is capable of negotiating fair agreements with perpetrators in the face of past traumas and injustices. In other words it is merciful, and able to forgive, and appreciative of incompatible points of view in the community.


Interesting that the implacable logic of evolution should select for the most placable, merciful, forgiving, and yet insistent character type.


My apologies, I’m going by leaps and bounds here, there’s a ton to be said, I’ve written a whole book about it. Chapter 2 of The Healer Messiah calls that character the Holy Spirit. On a thumbnail, the argument is that we should want a covenanted relationship with our enemies, with those who continually offend us. That is God’s Spirit revealed in scripture. We are children of that God when we too breathe that spirit.


It is not a given that we’ll make it to the heaven of the beloved community. It is unclear whether the violence that has been bred into us—for in the medium term it has been very successful—will result in our destruction before we have the time for the beloved community to supplant more violent forms of social order. But that’s our agenda, those of us who have chosen life.


Back to the street: yeah, the Holy Spirit is a character type, which we are (barely) capable of housing, the image/representative/Spirit of God, and which causes us to do things which turn out really great, unless they get us killed, but even then it’s worth it for the long haul.


Street version, type evangelical: Jesus is God, God who on the cross paid for our evil and reconciled us to Himself. Jesus’ miracles and above all, resurrection, are proof of his being God.


My version: The very idea of Jesus is incredible: someone who is both God and human. Might as well say both infinite and finite, both one and many, he’s a walking logical impossibility, marking that this story gainsays the logic of power. Power is the ability to control the situation. That’s what Jesus gives up. The Jesus story calls the weakness of human relationship the power of God.


In Jesus we meet God in humanity. Here there are just too many things to say: Jesus as symbol uniting God and humanity, Paul saying that Jesus is the prototype, the new Adam, of a restored humanity, Jesus likening loving God with loving one’s neighbor, Jesus teaching us to pray “forgive us our offenses as we forgive those who offend against us”, and on and on.


In the gospels and in Paul, Jesus wholly incarnates God’s spirit.


AND to take this disturbing language to its social conclusion, Paul claims we are to be like him, in the church, embodying the spirit of God in our relationships to each other. That is, like this God revealed in Jesus, we do not attempt to control, we ask each other insistently for what we want, and we will die rather than coerce. Jesus is a God who risks the cross rather than use power over us.


The Spirit is what ties Father to Son. The implacable is tied to the cross by the power-renouncing merciful forgiving patient and insistent nature that the implacable selects for.


So in contrast to the street version, the cross is not Jesus’ payment for our sins in a ledger slaking the wrath of God. The story of Jesus on the cross is a story about us, us as victims, accepting the cost of the trauma inflicted on us by perpetrators—who are also us. Nobody can bring our dead back. The cross is the price borne by victims who rise above their trauma, and want a relationship with their offenders who can’t possibly pay the price themselves, because they did not suffer the irrevocable loss.


Giving thanks to Jesus for his accepting the cross is language for our thanks to each other for accepting the remaining unrestitutable costs of the traumas we have caused each other, and wanting a relationship nonetheless. So yes, reconciliation is the goal, but not by a payment done by some third party long ago—this is personal.


That's the God I believe in.